These Healthy Pumpkin and Sage Stuffed Shells are the perfect Fall recipe with flavors like cinnamon and nutmeg and less than 300 calories per serving! 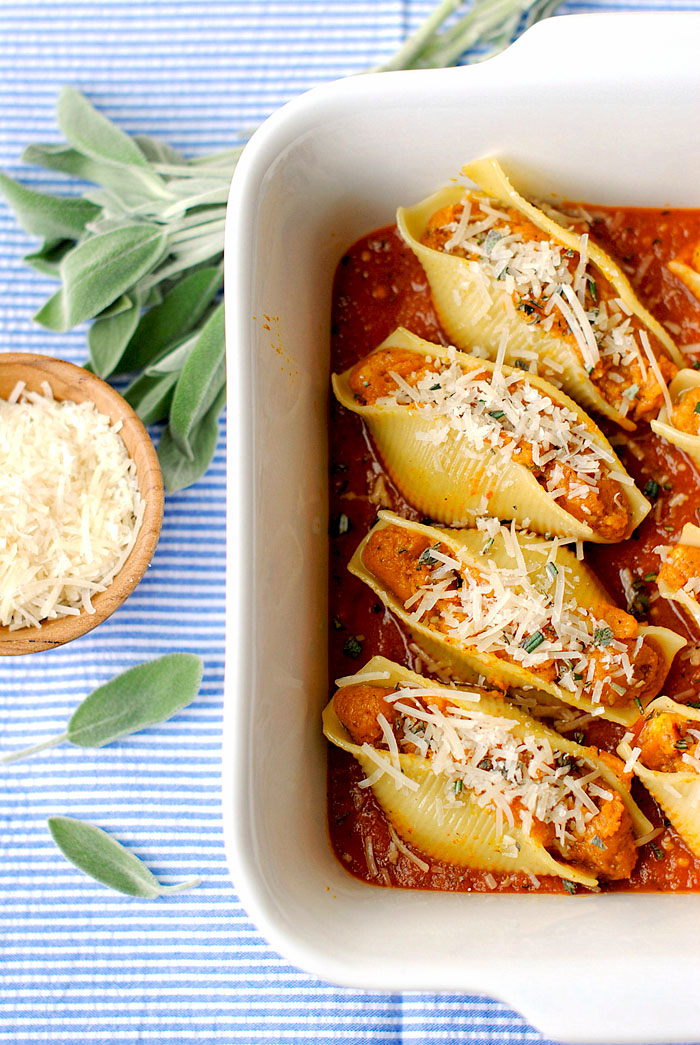 Mmmm I just LOVE Fall.  Boots, scarves, sweaters……and um PUMPKIN everything.  Seriously I’m obsessed with all the flavors associated with this season – cinnamon, nutmeg, pumpkin spice, sage, apples, butternut squash – yeah you get the idea.  They all remind me of when I was little growing up and going apple picking with my family, drinking hot cider and salivating over my Grandma’s pumpkin pie.  Well I’m an adult and still look forward to these things and this recipe reminds me of all those memories wrapped up into one savory delicious dish!

Stuffed shells are one of my guilty pleasures and let me tell you the flavors that come from this are incredible!  The aroma alone makes this dish a winner in my book, but on top of that the filling in the shells is super creamy, the pumpkin marinara tastes amazing all on its own (yes I may have been eating it with a spoon during the making of this recipe) and the combination of pumpkin, nutmeg, cinnamon and sage all come together for one surprisingly sweet yet savory dinner.   And since this recipe incorporates so much pumpkin, you really don’t need as much cheese which lightens up this dish tremendously.  I mean we’re talking under 300 calories for 4 stuffed shells! 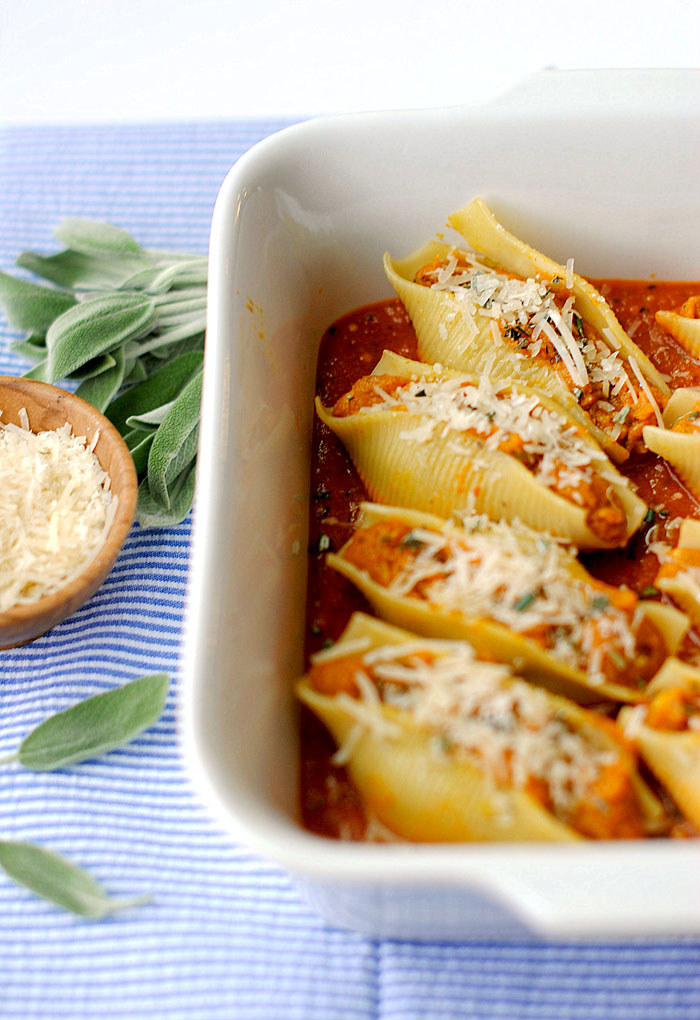 Making this whole meal is much easier than it looks too!  To stuff the shells I used a baker’s pastry bag (or piping bag)

that I cut the corner off of, but you could always use a small plastic baggie or even spoon the filling into the shells by hand.  I just find that piping the filling not only saves a lot more time, but it’s far less messy!  Another great time saver is prepping the filling and stuffing the shells the night before, covering them with plastic wrap and refrigerating overnight until ready to bake the next day.  This makes it so easy to just come home, make the sauce and throw everything into the oven in just a few minutes!  The stuffed shells can last up to two days in the fridge before baking, but the fresher the better of course.

This particular recipe makes the perfect amount for about 4 people which is how we like to make it so the hubs and I have leftovers for lunch the next day, but if you wanted to use the entire box of pasta shells simply just double the whole recipe.  There are just SO many shells in one box (yeah we’re talking like 40) and there is no way the two of us could eat that much pasta in under a few days so I just make half the box and store the other shells away until my next use.  Hope you enjoy this as much as we did!